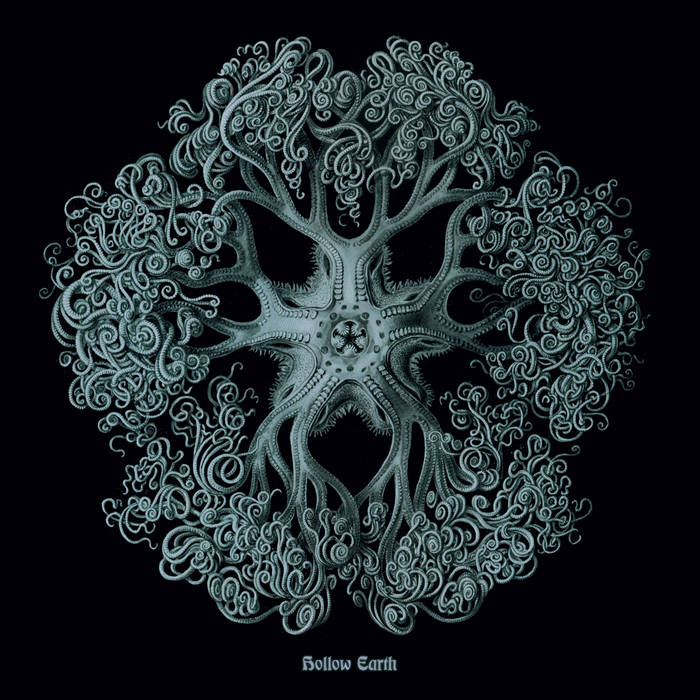 Intermittently available in LP/CD format from:

...and from a host of nice people over at Discogs:

“There's a salty tang in the air of early British Progressive rock, some King Crimson perhaps, some Spring, some Canterbury. The organ and strings, and the at times slightly sinister mood, remind me a little of the Crazy World of Arthur Brown…” – Daniel Dellamorte, music historian

The members of Hollow Earth seem to be in a some kind of a cult, self-styled 'gatekeepers of Shambhallah,' whatever that means. Their chapter was ostensibly founded by Nicholas Roerich in Naggar, in the Himalayas, in the 1930s, and they are ‘perpetually championing the truth against those who believe in a solid—and to a lesser extent also those who believe in a flat—Earth,’ according to the third edition of the Encyclopaedia of Global Cults and Sects* at my local library.

Their sectarian leanings are only circumstantially evident in the music on this disc—all these years, they must have listened far more to their Deep Purple and Pink Floyd records than the words of their cult leader. The result of this clandestine musical necromancy is full-blown Progressive Rock with solid Psychedelic underpinnings, taking their cues from : Meddle era Pink Floyd, Mark I Deep Purple and early King Crimson. Oh, and Pink And Grey-era Caravan.

Hollow Earth – Out of Atlantis is out now on vinyl from Kommun 2 (home to Agusa, Hills, The Spacious Mind and Yuri Gagarin) on November 24 on 140 Gram Vinyl, limited to 500 copies: 100 splatter; 200 white; 200 black; and will be released on CD on January 1 by Sound-Effect Records.

(*) Entry: "Societé de la Terre Creuse". Curiously, it also states: “In 1968, the Northern Europe chapter of the Society decided to finance their missionary and propaganda activities by forming a Psychedelic music group, a major trend in popular music at the time. As the writing of the introductory pamphlet stalled due to stylistic and geological differences among the members, the project was delayed, but almost fifty years later, in the 2010s, the project was finally green lighted. The cult declared themselves ready to take on the world with Psychedelic Rock, thus financing their big push.”

All titles composed by C. NEMO

Strings on Electric Eden by the QUINTETTE TERRE CREUSE

Released on LP by Kommun 2

Released on CD by Sound-Effect Records

Bandcamp Daily  your guide to the world of Bandcamp

Guest hosted by Tamar Osbourn aka Collocutor and Toshio Matsuura.